It’s not always so simple.https://t.co/NWNaRqy0EQ

If you didn’t have a girlfriend or any benefit friends, maybe you would start some matching application like Tinder. At least I would do that and I did. Anyway then you guys literally “guys” might struggle with how to get attention from women even a first contact. That is quite important for men who doing the kinds know how to get attention or be attractive for them. But I think I am getting over it more or less. So I am going to introduce six tips and actually how I met some girls on Tinder.

By the way, I have ever tried and met girls in Japan as well as in USA. BUT this is not for everyone. It totally depends on person and this says that implementing these ways might have more possibility to succeed in meeting women than do nothing and just sending boring messages which are “How is it going”, “How are you doing?” and “Hey”.

Sending some funny GIFs or pics with messages

Though this way has a certain effect to draw attention, this may depend on person. Because a couple of girls don’t like the way so that they feel men who send like the pics with messages to women are ridiculous and not serious for looking for lover. Indeed, there some people who looking for a serious relationship on even Tinder but rather than on Tinder no matter of woman or man.

As for these people, the kind people who send the pics are out of question probably. But beforehand nothing starts unless getting replied and continuing to chat with one another. Then this way is effective based on my experience, also this is a famous way on Tinder to be attractive because other sites also introduce this way.

I actually learned it from them. If you got replied from women, you should change you tone to keep interacting I think. Because keep chatting in a prank way has possibility that women regard you as boring and really weird. Also changing the perspective for you might originate the gap of hers feelings for you and it makes hers provoke something of special feelings for you. As a first step, trying this way is effective if you never met girls or continued chatting ever since. 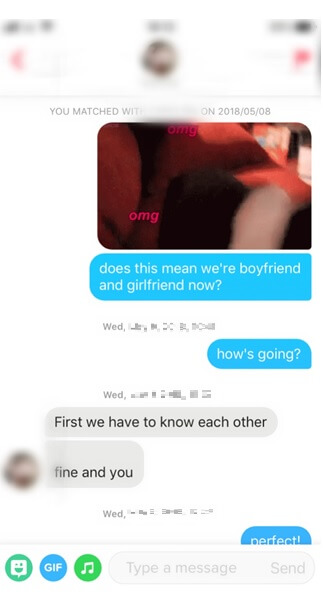 Adjusting your energy to the girls

This is also one of effective ways to get attention. By the way, I am going to explain details of this so that probably there are might some people who don’t understand what this means. Human has various energies. They are high energy, low one or the middle one then if you could control them, you can be intellectual or fun guy.

For example, if the girl who you want to interact with set a certain song on the app, you could talk to her about the topic as long as you like music. Or if you struggled with you don’t like an entire music or don’t know the song but you really want to have a conversation with her, you could try to search the songs and the lyrics. Actually, I had ever tried this way before and I kept having a conversation with her. It is applicable to not only music but also sports or major at university.

You can draw her attention whatever topic as long as you keep thinking of her and arranging the way of talking to her. It’s really a basic style of getting attract so I think you should do that if you haven’t established your own way. But some people arrange the style in an exceed way. Then it would be disaster and they are might regarded as nasty. To be honest, that is my experience too. In short, what I want to tell you is just do the basic way as I mentioned.

When you try to meet girls in other countries apart from your country, you basically have to use their countries. Then although you may think we usually use English as an international language over the world to communicate with many people living around the world, honestly there are less people who are able to speak English than you anticipated. In case that will happen, being able to speak various languages as much as possible is quite good for you. Anyway let’s get back to what I originally want to tell. That is even if you were in your country and tried there, you should use the opposites’ languages when you match other countries.

Let me give some examples. You are Japanese and your native language is Japanese too. Also you try to meet someone in Japan then you actually meet a French girl and you fall in love at first sight even without having met her. So you barely want to interact with her but I don’t know how to deal with it.
As long as you can speak up to her in her native language (probably French), that would turn to a good consequence. This is also what I have tried it to a Belgium girl then we mainly talk in English, and sometimes Japanese. Subsequently, I could meet her and we are still now in a relationship. Also I considered talking to Mexican girls and Latin American girls who living in USA while I was in USA in Spanish. They mostly had interesting about me right after realizing I am able to speak Spanish then they often asked me anything in Spanish as well as English.

In fact, I have been cheated on a certain hot girl. I was deceived my money in my credit card by her and some companies. As for how to avoid them, first of all speak up to them in the same way as I mentioned here and just wait for getting message from her. If she didn’t reply to you, it’s okay. But provided that she replies to you and the content of the message does not make sense, you should be careful and you shouldn’t pursue on her on the app. This is unexpectedly more difficult more you think. Some of guys might send some messages to her respectively. Then I want to state to you that that is just a trap.

How to keep talking

As I said on “Sending some funny GIFs or pics with messages”, if you wanted to keep talking to women, you should change her perspective of you by whatever way. In addition, ask women about her hobby and light information but should not ask serious questions or a personal one.
I basically ask “What is your hobby?” (This is a super basic question.),
“Are you a student?”,
“What is your major at university?” (You can use this one as long as you already know she is a university student.),
“What are you doing?” (This is a little a typical question so some girls may be bored to be asked this question or this one reveals their personal information, which means some people might feel uncomfortable.),
and “Do you have any siblings?”.

Then I often lead women to feel like talking majors at university so that I like to talk about the topic. But there is a big point that I don’t want you to misunderstand is asking women even not serious questions or flat questions too much is uncomfortable. That must make women annoyed much less would make them scared. So you should be careful and every time you send a message, you ought to check your message itself whether you ask too much or not. Actually, judging it by oneself on object perspective would be tough a little though.

How to enhance the relationship and meet

If you could keep talking to women and everything were going well, you would rather shift your field where you guys are talking to each other to the other apps which are Instagram, Snapchat, WeChat or LINE. Because these apps can call to for free and that would make you guys been more familiar with one another. For me, I feel without shifting apps to talk, you don’t succeed in meeting women. 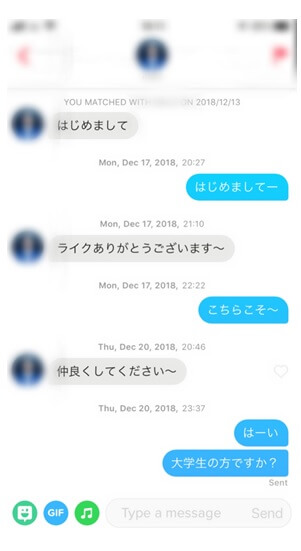 First, asking woman out on a date to go to have dinner. I think it is the most natural way for both of women and men. It technically seems not to have an ax to grind so you would get response “yes” given that you enough talk to the woman. So you have to select a place where you are going to have dinner or maybe just lunch so that you won’t be deciding between which restaurant you go to.

Second, asking women in a direct way. Indeed, this is not an intellectual way. But as long as she feels you are a honest person, that would be better than do the other ways. At least it might as well be better as well do nothing even you are not honest. Then, “in a direct way” means telling your truthful feeling like “you are really beautiful”, or if you want to emphasize on your feeling, you will say “you are the most beautiful woman that I have ever seen in my life”. It is usually said that these phrases are cheesy and sounds lame. But you can use them at the last phase on the date or you might be on a situation where you have no choice other than say them.

Third, invite woman to go out for a little excursion. This is similar to asking woman out on dinner. But asking out on dinner as a first date has possibility to be felt it would be dangerous or waste of her time. So this way is the best I think. Of course it depends on your and her nature.

In fact, every time I finally ask woman out on a date, I use this way.
I will give some examples which are saying;

I found a really fashionable bar at 〇〇〇 a couple of days ago. But I honestly hesitate to go there by myself a little. So why don’t we go there?

There is a really famous beautiful place we can see at night. So I want to go there, would you come with me?

I have succeeded in going with woman as using this way. That would be good for you.


I was introducing six tips to succeed in meeting women on Tinder. Though the last two were not related to Tinder, I think it must be helpful for you. Because even if you were good at talking or a nice guy, it would be failure without planning firm schemes. I hope you will get good luck as using Tinder.

Can I Meet Japanese Girls on Tinder?