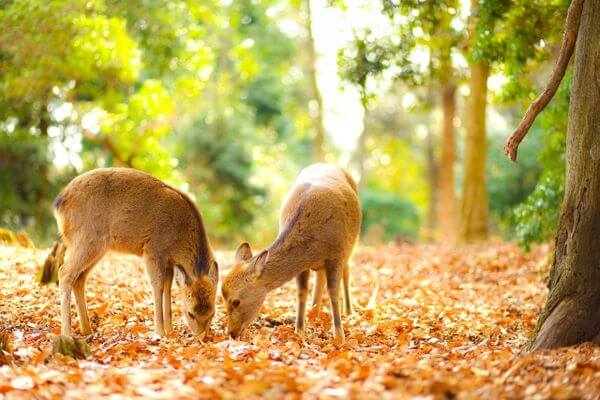 Nara Prefecture is usually known as a destination for school excursions and famous for its deer and big Buddha statues.

The people are usually less sociable with closed off personalities and have the tendency to follow the rules. In this article, I will introduce some meet-up spots in Nara Prefecture.

Most of the locations in Nara City are tourists attractions. Both the women and ancient buildings in Nara are sleek and the people of Nara are usually relaxed and chill.

I will introduce a few meet-up spots for the laid-back city of Nara.

(comments on Instagram) “The view of the Former JR Nara Station building together with the crescent moon. ”

The former train station building is now used as Nara City’s tourism office. This is an advantage since you can check out tourist spots while waiting for your date. It is easy to find buildings with special architectural structure, such as the building shaped as a temple with a special rooftop design. You can also get help and directions from locals who are used to tourists.

(comments on Instagram) “I personally call this fountain as the reverse urinating child monk. When I see this statue, I think of eating persimmon leaf sushi with Nara’s pickles and bringing home a deer.”

Not only are there a lot of famous tourist attractions nearby, such as Nara Park and Todaiji Temple, this is also a good area to have a walk in Nara with amusement facilities such as cinemas.

There is a saying that it is the most suitable to meet up with relaxed people in front of the flowing water fountains. By exiting Kintetsu Nara Station from the “Nara Garden” exit, you will reach your destination after going up the escalator. There is a statue of Mr. Gyoki, a well-known figure by every resident of Nara. On top of that, there are souvenir shops and shopping streets around the area so you won’t have to readjust your schedule to do shopping.

You can wait for you date while sitting near the fountain. The down side to this location is that this meeting spot may be affected by the weather as it is outdoors.
Map: Water Fountain

3.In front of Mr. Gyoki’s Statue

(comments on Instagram) “A mime performance has started in front of Mr. Gyoki’s statue. ”

Mr. Gyoki’s statue is built on top of the water fountain at the open space plaza in front of Kintetsu Nara Station. It has been built for a long period of time, so it will be no stranger to people who have visited Nara previously.

There are also a lot of monks and temples around the area. Mr Gyoki’s statue is a good meeting spot as it is easy to understand the direction and it is able to convey the image and history of Nara.

(comments on Instagram) “(Open in June 2017) “Piaza Nara Hotel” will be developed on the west side of JR Nara Station with newly built condominiums.”

The JR Nara Station is easily accessible and easy to understand, so there will always be a crowd around area.

The most suitable location to meet up around JR Nara Station is at the west side and the most prominent building is Piazza Hotel Nara. The disadvantage is that, many women are wary of meeting in front of the hotel, especially at night.
Map: Piazza Nara Hotel behind Nara Station

5.In front of Kintetsu Nara Station

(comments on Instagram) “(Open in June 2017) “I somehow feel nostalgic. This is the view of Kintetsu Nara Station.”

Therefore, it would be hard to get lost. On top of that, there is also plenty of car parks. There are shopping streets and restaurants, so it would be suitable to meet in front of the train station and eat a meal together, then go for a leisure stroll afterwards.
Map: Kintetsu Nara Station

The Kitskatsugari district is a peaceful area where you can spend your time together with nature. I will introduce some meet-up locations at the Kitakatsugari District.

(comments on Instagram) “(Open in June 2017) “Mos Burger Oji Branch has now opened. It is immediately accessible after exiting the train station. This is the 12th branch in Nara Prefecture. There will be more branches in the future.”

Mos Burger is located along the JR train tracks and next to Seiyu, which can be used as a landmark. But do beware of the fact that most women do not like meeting at a fast food restaurant.

The people of Nara are laidback people with a serious personality, they do not come off as strong in comparison to people from the other Kansai Region. They are free spirited people but they usually prefer meeting somewhere easily understandable. Feel free to refer to my recommendations.